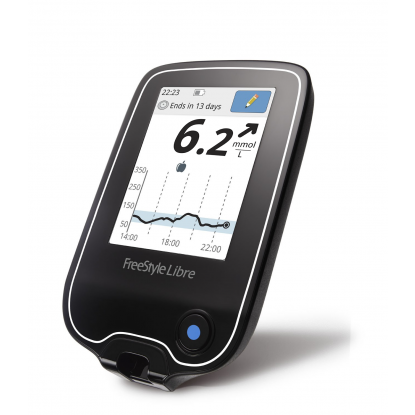 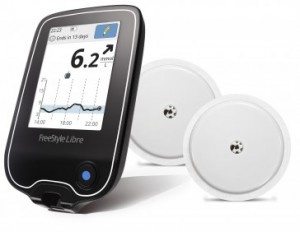 After using it for a year now, it’s time to review the Freestyle Libre and specifically when it’s being used on Children. The Libre burst onto the pharmaceutical market at the end of 2014, the World’s first Flash Glucose Monitoring System. With a marketing headline “Why prick when you can scan?” it’s no wonder that thousands of people snapped them up the day they went on sale.

Unfortunately many parents of children with Type 1 Diabetes were disappointed to see that the product wasn’t licensed for use in under 18’s. Though exciting news on 4th February 2016 Abbott announced that the Freestyle Libre was now approved for use by children aged over 4 years old.  Though many parents including us went ahead and ordered this revolutionary system when it was first launched in 2014.

There are many reviews of the Freestyle Libre available on the internet but not that many from parents using it on their children so I wanted to share our experience. We have now been using it for well over a year so it’s safe to say we know the product inside out.

WHAT IS THE FREESTYLE LIBRE?

As I mentioned previously it’s a Flash Glucose Monitoring System. It consists of 2 parts, a small sensor that is worn on the arm and a hand held scanning device, as you can see in the picture below. 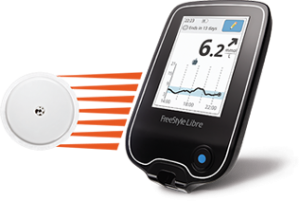 Basically it’s designed so that you scan the sensor anytime you want to know what you BG Levels are, without the pain of a prick test. Unlike a regular BG Meter the Freestyle Libre can show you so much more information, each time you scan you will see the BG Level along with an arrow that shows you which direction your blood glucose is heading. The sensor takes continuous readings even when you are not scanning, when you scan the data is transferred to the reader so it even shows you what your levels have been doing between scans. This information is displayed on a graph on the handset. In essence the Freestyle Libre has many of the abilities of a full CGM system though it doesn’t have the alarm features. One of the big attractions of the system though is how much cheaper the set up costs are compared to CGMS, but I will cover that later.

FREESTYLE LIBRE APPLICATION OF THE SENSOR

Most children don’t like trying new technology to help control their Diabetes and my son was no different. I actually ended up applying the first sensor so he could see how it worked and how painful it was. 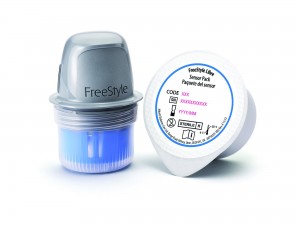 Applying the sensor is super easy, there are 2 components that you push together before applying it to the arm. To apply the sensor you simply push down on the insertion device. If you look down into the insertion device the needle looks a bit scary but don’t worry it retracts very quickly leaving the sensor in place. I can promise you when I tried it, I didn’t feel a thing! It really is pretty painless and is certainly less painful that a finger poke.

A year on since we started using the Freestyle Libre on my son who is now aged 12 I have to say we love it and wouldn’t want to be without it. It’s so easy to use and we tend to scan far more than we ever poked which means often we can head off lows before they happen and correct highs much sooner.
We still finger poke just much less than we used to, for example if the Libre shows a 3.6 and my son doesn’t feel hypo we will double check it with a finger poke, as Abbot recommends that anytime you get a results that doesn’t match how you are feeling you should double check the results. Also if we were to give insulin at a time when the arrow indicates that bloods are fast changing we will prick before we bolus.
As a parent what I love the most is how much easier night times are to manage. Jack used to hate it when I came to his room to finger prick during the night, you know what I mean, the whole night time insulin ninja routine that is spoilt by him pulling hands away just as you’ve got the blood out etc. Now he doesn’t wake, I walk in scan and walk out back to bed in seconds.
Finger pricks really do only show you a snapshot in time, nothing had prepared me for the shock of what really goes on with blood glucose levels in between pricks, we discovered breakfast spikes that we had no idea about and also it was surprising how much time he was out of range. From finger pricking results and our HBA1C below 6.5, I thought he was pretty much always in range….how wrong I was.
Night times were another eye opener. I had always believed he didn’t have night time hypos, in fact I’d rarely caught any on a finger prick, and whilst they are not often they do happen, I’ve seen from using the Libre that there has been times when he has been in range at 2 scans 3 hours apart but can have spent much time between those 2 scans below 4 mmol.

HOW ACCURATE IS THE FREESTYLE LIBRE?

We have found the Libre to be very accurate but a word of warning if you are expecting the results on the Freestyle Libre to match your BG meter exactly you will be in for disappointment. You need to be ready to accept that managing Type 1 Diabetes is not an exact science and that even blood glucose meters are not gospel, in fact they are considered accurate providing they give results within 20% of the accurate figure at levels above 4.2 mmol 95% of the time…what about the other 5%? So for example if the true result was 5 mmol the meter could read any number between 4 and 6 mmol to considered accurate. So you will find that your meter will give a result somewhere in that band and so will the Libre.  Here is a good explanation from Diabetes UK.
In our experience though at levels below 4 mmol the Libre often reads lower than a meter and it often reads higher at higher levels.

HOW LONG DO SENSORS LAST?

Sensors are meant to last up to 14 days. However in the early days we had quite a few issues where the adhesive on the sensor wasn’t strong enough and it would just fall off after a few days. Now we use Skin Tac Wipes that we dab onto the sensor before applying it, we also wipe the edges if they start to peel at any point in the 14 days. Since we started using these wipes we’ve managed to get the full 14 days out of most of them. Since using Skin Tac we haven’t had any fail due to the adhesive but we have had some fail to start, or just stop working part way through the 14 days. Abbott have been pretty good at replacing them, though recently I’ve heard they have stopped replacing faulty sensors for children, but I haven’t had to return any since this policy came into force so cannot confirm if this is true or not.  Though once the Freestyle Libre is licensed for children’s use I’m sure this won’t be an issue anyway.

HOW MUCH DOES THE FREESTYLE LIBRE COST?

A starter pack that consists of the handset and 2 sensors is priced at £159.95. So it’s not cheap but it’s far more affordable than a CGM system like Dexcom, which will cost around £1000 for a set up. Thereafter each sensor costs £57.95 including VAT though if you are exempt from paying VAT that can be removed on the website.
WHERE CAN I BUY THE FREESTYLE LIBRE?

The only place to buy the system is from Abbotts Website.

For us the Freestyle Libre has been life changing. Scanning is so much easier than pricking plus it really did help us navigate our way out of the honeymoon.

For more information about the Libre and CGM you may find the following sections of our website interesting.

LIBRE VS DEXCOM G5 – A comparison of both systems.

I do hope you’ve found my review on using the Freestyle Libre for Children interesting. If you have any questions or want to leave any feedback for others considering using this flash glucose monitoring system then please do use the comments section below. I will point out that this information is based on our experience and is not medical advice.

Before you go though don’t forget to subscribe for free to receive updates from us directly to your inbox then you won’t miss any news, tips or reviews. Just pop your email in the box below.

One thought on “Freestyle Libre Review 2016”